The Requiem by Giuseppe Verdi is a choral piece which surely tops the short list of truly iconic works. There can be few people who have not heard – or perhaps been struck by is a better description, such is the visceral power of the music - the opening bars of the ‘Dies Irae’, the foretelling of the Day of Judgement. Verdi was primarily an opera composer and his sense of the dramatic, and of the awesome potential of massed voices, orchestra and soloists, has never been bettered.

Yet alongside the terrifying threat of hellfire Verdi places music of exquisite beauty; around the sounding of the last trumpets (for indeed there are eight of them) there are melodies of extraordinary tenderness; interspersed among the waves of choral sound are gentle arias of a single voice raised in song.

For this performance, Nottingham Harmonic Choir is joined by Nottingham Philharmonic Orchestra and a quartet of world-class soloists, led by Rachel Nicholls, fresh from her success as Brűnnhilde at English National Opera. It promises to be a memorable and moving occasion. 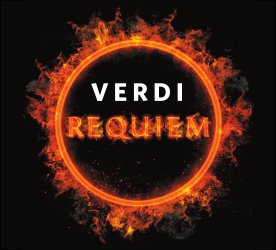