The Nottingham Harmonic Choir performs its Family Carol Concert each year, usually on or around the weekend immediately before Christmas.

Bring the whole family to enjoy Christmas music at this ever popular, child-friendly concert. The choir and band lead the audience in well-loved Christmas carols, while the choir provides more peaceful interludes with celestial carol settings. The Thoresby Colliery Band adds sparkle with its solo items.

This concert takes place in the often frenetically busy, but expectant in-between time after the end of school term just before Christmas. It is a good time to make space to relax and enjoy enthralling Christmas music in a warm, friendly atmosphere.

There is always an opportunity for all the children to come down to the stage to sing carols. Some of them, if they are the first to answer a question, or sing really well, will get the chance to conduct the band or choir.

When not joining forces with the band, or leading the audience in some of the familiar Christmas Carols, the choir performs beautiful, though perhaps less familiar, carol settings ranging from exquisite and intricate baroque pieces to the contemporary favourites by composers like Morten Lauridsen and John Rutter.

The Thoresby Colliery Band is one of the most exciting brass bands in Europe, and has won countless accolades for its inspirational playing. Even if you think you don’t like brass bands, this one will convert you. Over the years they have played pieces ranging from Frosty the Snowman to Rossini’s William Tell Overture, Tchaikovsky’s 1812 Overture and Wagner’s Procession to the Minster. If you get seats close enough to watch their percussion section, it is an amazing sight and sound.

You are guaranteed to go home from this concert with a warm glow inside and a feeling of the fun of Christmas.

Review of our Family Carol Concert on the 19th December 2018

This is a review by Tanya Louise at Nottingham Live.

The review is best read at Nottingham Live, but here is a simple text version:

‘The best way to spread Christmas cheer is singing loud for all to hear’
OK, it’s a quote from Buddy the Elf, but the guy talks a lot of sense! Nothing says Christmas more than a good old sing along, and the annual Nottingham Harmonic Choir Family Carol Concert is always rousing way to enjoy the final run up to the big day.
The popular formula remains the same as previous years. The choir sit above the Royal concert Hall stage in the aptly named choir stands. On stage, joining them is the Thoresby Colliery Band. It is one of the few times in the year you will see the stage so stripped back of sets and yet also so full of people at the same time.
We switch between turns from the choir, the band, and audience participation hymns, which keep proceedings moving along nicely.

The evening begins with audience, choir, organ (played by Simon Hedley) and band together for O Come all ye Faithful. We all have song sheets, particularly handy, not only for the running order, but also those awkward later versus we tend to forget what with singing them once a year (yet strangely I could recite Wham’s Last Christmas word for word).
We stand to sing so get to rest during the next section as the choir , conducted by Richard Laing, entertain us with Shepherd’s Pipe Carol, What Sweeter Music and Jubilate Deo. Richard hosts the majority of the evening, those that go each year will be pleased to know that his jokes have not improved.
David Purkiss conducts the band for The Shining Star, The Christmas Song and The Kingdom Triumphant, before we’re back on our feet for O Little Town of Bethlehem (a version of which incidentally is the ONLY Cliff Richard Christmas song I think is half decent – this isn’t that version – this is the traditional carol obviously).
The choir then show us how it’s all done properly, as they treat us to The Lamb, Wassall and As up the wood I took my way.
As a treat for kids in the audience, who I have to say seemed very well-behaved, they were all invited on stage to sing Away in a Manger and Jingle Bells, with four lucky children getting the opportunity to conduct the band and other children.

As the children are returned to their appropriate adults we all sing Once in Royal David’s City before we break for an interval to lubricate our vocal chords.
Hallelujah! from Messiah opens the second half before we all join in with Kings of Orient. The final solo spots for the choir and the band follow as they perform Alleluya – A New Work is come on Hand, Silent Night and Sussex Carol and Troika, White Christmas and Shine as the Light, respectively.
The finale is Christmas Pops Trio and Rockin’ around the Christmas Tree, which sees the choir don their Santa hats, another tradition. Nice to see the moving hat is still going too. If you go along, keep a look out for it!
The evening closes with everyone joining in together for Hark! The Herald Angels Sing.
Another great Christmassy evening, with tremendous performances all round.
They’re going to be doing it all again on Saturday, so grab your ticket and fill your heart with a little Christmas cheer. 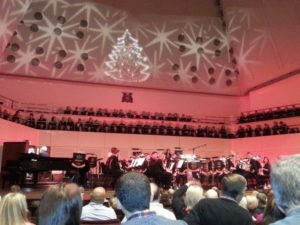