Bach Wrote Some of his greatest music in his Passion settings. These combined words from the gospel account, with reflective arias and some of his best-known chorales which would have been sung congregationally in Bach's time.

The use of the original German rather than English allows the music to flow more naturally to support and dramatise the accounts of the Last Supper and Good Friday, and to give space for contemplation. The music is still as vibrant and powerful now as it was when it was first written. 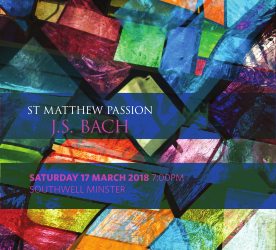 On a night when snowy blizzards forced most people to stay at home, those brave enough to battle the weather were treated to a glorious performance of Bach’s St Matthew Passion at the Minster in Southwell on Saturday night. The Nottingham Harmonic Choir was joined by the Southwell Minster choristers, the Musical and Amicable Society and an impressive group of soloists to tell the story of events leading up to the crucifixion and burial of Jesus. The range of emotions, from anger to grief, were expertly handled by the Musical Director, Richard Laing; the choral climax of Part One, ‘Sind blitze, Sind donner’ was powerful and dramatic, whilst the chorales were beautifully managed; sensitive, stately and suitably warming on this coldest of nights. The combined orchestras provided a sympathetic accompaniment throughout, with some outstanding instrumental solos, and the impressive soloists each demonstrated rich and mellow tones. In particular, the principal storyteller, Charles Daniels, enthralled the audience with some moments of exquisite tone and quality that, at times, were allowed to linger and resonate to maximum effect.