Duruflé's ethereal Requiem is a deservedly enduringly popular work. It is a Requiem which seems to look heaven-wards with hope rather than trying to fill the living with the fear of hell. This is a much more positive emotion for those left behind.

Kodaly Missa Brevis was first performed in the Budapest Opera House cloakrooms, during the siege of Budapest in 1944/45! At the time Kodaly, along with most of the civilian population of Budapest, had taken refuge in cellars and basements of the city in an attempt to survive the 24-hour a day bombing raids. It was in this environment that Kodaly wrote his Missa Brevis,, some parts were adapted from his earlier organ-mass, written in 1942.

In Tippett's A Child of Our TIme, the spirituals perform a similar role of relief and a time for contemplation amid the agonising action, that the Chorales perform in the Passions of Bach. Although most of the music in A Child of Our TIme is full of the angst and conflict, the four spirituals are beautiful contemplative settings which stand as complete works in their own right. 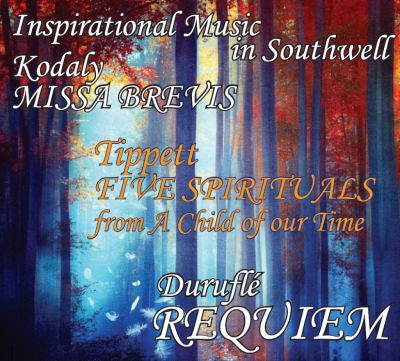