Nottingham Harmonic Choir is thrilled to join the Hallé Orchestra and conductor Rory Macdonald in this final concert of the Nottingham Classics 2016-17 season.

This concert brings together two English composers inspired by Italy, and an evergreen concerto written by a Norwegian abroad. The dynamic young American pianist Andrew Tyson is the soloist in Grieg's A minor piano concerto which has become his most significant orchestral work, his familiar lyricism allied to powerful drama. Elgar's stay in Alassio in 1904 inspired him to write his extrovert overture, In the South, whilst William Walton began writing his cantata in a monk's cell on the Amalfi coast.

In 1929, Walton undertook a BBC commission to produce a small-scale choral work. However, his setting of the biblical account of the lavish feast thrown by the Babylonian King, Belshazzar, outgrew the original concept. Walton regarded his work as a three-movement choral symphony with opulent orchestration, lively cross rhythms and colourful dramatic writing.
Belshazzar's Feast was first heard in the 1931 Leeds Festival. Sir Thomas Beecham was so convinced it would fail that he sardonically suggested adding a couple of brass bands to its massive forces. Walton did just that, creating a widescreen spectacular, powered by his thrilling rhythmic drive and most brilliant orchestration.

The work achieved instant acclaim with critics and audiences alike. 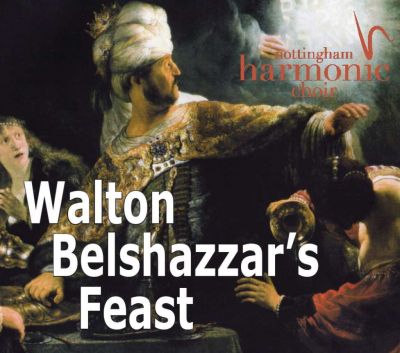 The Nottingham Classics season came to an end on Saturday - and almost took the Royal Concert Hall with it. But rest assured: Belshazzar's Feast's combination of full-throated Harmonic Choir, supercharged Hallé, two brass bands and organ may have hurled a tsunami of sound at the audience but left them intact to come back for more musical thrills in the autumn.

Walton takes no prisoners when he tells the story of Belshazzar's feasting,
blasphemy and eventual comeuppance.

This is Technicolor, epic, Cecil B. De Mille music. The Hallé were on magnificent form, overwhelming in richness and force but also minutely and tellingly detailed. The Harmonic Choir matched them in power whilst vividly projecting the text. Right from the opening 'Thus spake Isaiah' it was clear that every vowel and consonant would resonate as part of the rich sound tapestry.

The Choir were especially in their element when energetically praising the
various idols of gold, silver, iron, stone and brass, whilst charismatic baritone soloist Benedict Nelson handled his narrative as compellingly as any biblical prophet. Conductor Rory Macdonald controlled the huge forces with an impressively tight grip, moulding a performance which plumbed the depths of sorrow and scaled the heights of joy.

Also on the programme was Elgar's sumptuous evocation of Italy In the South, the Hallé capturing its colour, spectacle and dramatic contrasts of present pleasure, historic violence and unashamed sentimentality.

And there was also a very distinctive performance of Grieg's Piano Concerto. Young soloist Andrew Tyson is definitely one to watch. His was playing in the romantic tradition: not 'just' technically dazzling but unafraid to stamp his personality on the music, rethinking the phrasing, sometimes going for the spirit rather than the letter of the score - but always convincingly.

All in all, an end-of-term musical celebration to relish and remember.
Read more at http://www.nottinghampost.com/halle-at-nottingham-s-royalconcert-hall-review/story-30358391-detail/story.html