C.P.E Bach's setting of the Magnificat is an extended and celebratory setting of the words, possibly written to support his application for a post in one of the royal courts or possibly in Leipzig - thus C.P.E.Bach at his best. The Nelson Mass, written late in Haydn's life, is considered to be one of the finest examples of Haydn's liturgical compositions.

Haydn wrote this Mass when his world was in turmoil politically as Napoleon was inexorably expanding his military influence throughout Europe and had won four major battles with Austria in the previous year. The work's original title was thus "Missa in Angustis" or "Mass for Troubled Times".

However, almost coincident with its first performance, arrived news of Nelson's victory over Napoleon at the Battle of the Nile, finally a set-back for Napoleon and a cause of great celebration in Austria. Later when Nelson visited the Esterhazy court with Lady Hamilton, the mass was performed in their presence - hence the enduring generally accepted epithet of the Nelson Mass.

J.S. Bach wrote at least four Orchestral suites which he himself called Ouvertures. The name 'ouverture' really applied only to the opening movement of each suite as it was similar in style to the French 'overture' of that time, with a slow dotted-rhythm opening, a fast fugal central section followed by a recapitulation of the opening theme in triple time. In the baroque period in Germany the term 'ouverture' tended to refer to a suite of dance pieces in French Baroque style, preceded by such an ouverture. 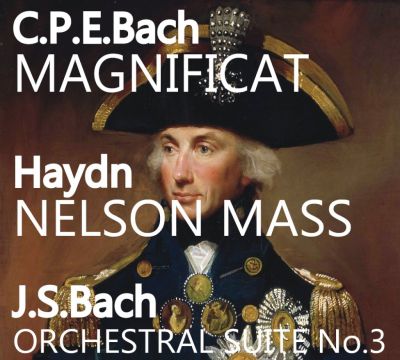